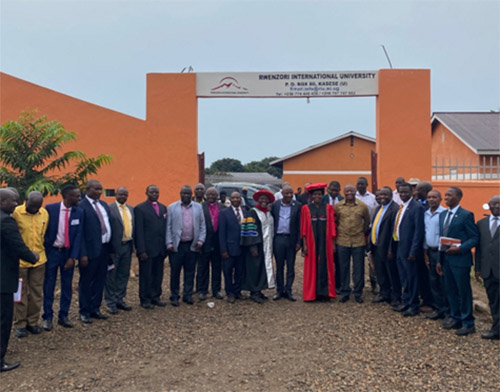 First of its kind among the Bakonzo of western Uganda

Ugandan Ministers of ICT and Chief of Defense Forces attended the inauguration of the first licensed university in Kasese District – Rwenzori International University. This is a milestone for the community! GlobalRise is on the university’s board of trustees.

Kasese District is situated in the southwestern area of Uganda and is close to the border of the Democratic Republic of Congo. It’s known for safaris at Queen Elizabeth National Park and other nearby parks, as well as for the Rwenzori Mountains where trekking is offered to visit Africa’s only glaciers. It’s steep, hilly terrain makes development hard and thus the area suffers from extreme poverty with farmers making less than $1.90/day.

“Until this time, our people had to go all the way into Kampala to get a university degree,” Dr. Nathaniel Walemba said during opening remarks. Founder of Rwenzori International University, he was recently installed as its Vice Chancellor. “That has now changed,” he added.

“Research, research, research is what this university must produce,” said the Honorable Geoffrey Kabbyanga, Minister of ICT. “Research and innovation are key for this area, to help its development.” He challenged the new University to bring forward ideas and to develop an innovation center of excellence.

As part of the Digital Food System, GlobalRise seeks to build a Center for knowledge transfer and workforce training at the University. This will ensure that local people are trained to manage the food system. Spearheading a university-government-NGO alliance at the Center, GlobalRise hopes to bring ideas that the government of Uganda urgently needs today in food and health improvement and digital equity.

Today, the University is already helping to fulfill the community co-created vision to “Kick Stunting Out of Kasese!” by deploying a “Digital Food System.” GlobalRise is sending one of its trainers for ICT training at the new University. Read more about the University at its new website: https://riu.ac.ug/index.html 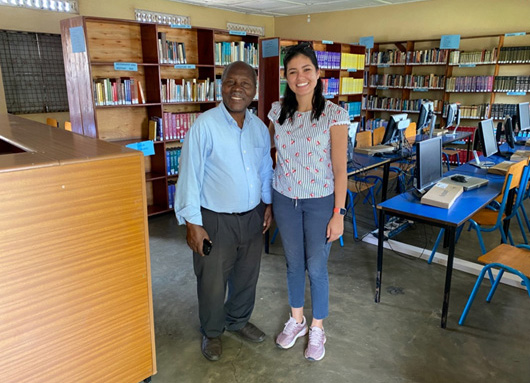 A new “first” for Kasese!

In Uganda, university-level education started 100 years ago when Makerere University was established in 1922. Today 60 universities operate in Uganda, yet none serve the area around the Rwenzori Mountains where over one million Bakonzo live…until today. In June 2022, Rwenzori International University was granted the first university license in the Bakonzo territory!

There is a good reason for this new development. In Kasese District over 50% of the people are extremely poor. This adds to a heavy malnutrition burden; one out of two children are stunted. Universities are catalysts of development with a profound multiplier effect on the host community.

Well-funded and resourced universities have a tremendous social and economic impact on the community. As hotbeds of innovations and entrepreneurship, universities are economic engines.

…and a number of certificate courses.

As members of the Board of Trustees, GlobalRise is excited because the University provides a workforce development component for the Rwenzori Food System. This includes training in drone aviation, digital health, ICT and more.

Congratulations to Dr. Walemba and the fine academic team in Kasese! We are looking forward to working with you – “together we will!”

GlobalRise is a 501(c)(3) non-profit public charity and is incorporated in the state of Tennessee, USA.

Please help us to provide good nutrition to children the world has entirely forgotten.