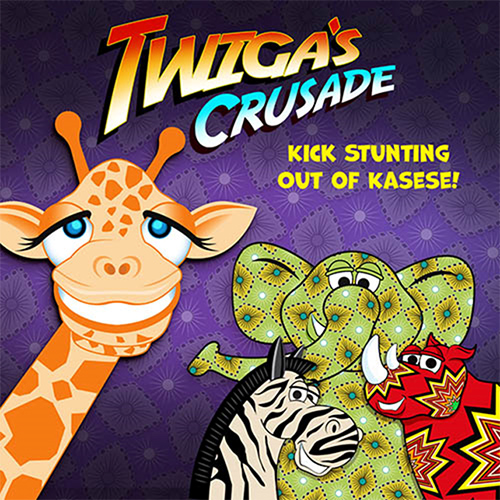 Prior to the pandemic, GlobalRise started a multi-year campaign to help the people of Kasese to eliminate stunting. Prior research indicates that this area has a 50% stunting rate – one out of every two kids. As a World Vision executive says, this is “an abomination”.

We want to tell you about how Twiga came to be…and her slogan to kick stunting out of Kasese.

Twiga means giraffe in Swahili. While Swahili is a language used throughout eastern Africa, the primary language in Kasese is Lukonzo and the primary tribe here is Bakonzo.

One day we were visiting a local restaurant called Jambo. The owner, Alice, was struggling over how to fund much needed work to build her business. Many women in this area have this struggle. Getting loans is often not possible.

Alice sat us down. She noticed that we were taking a liking to little animals made from local dress left-over material and stuffed with cotton that is still picked in the fields, mostly by women, today in Kasese. Alice told us that if we could sell a little of 500 of these animals, she would organize production and from the sales, she could fund improvements to her restaurant.

Karen, our field nutritionist, is not one to ask twice! She quickly formed a team at University of Costa Rica as part of an existing requirement to launch a project for their studies. She created a new “Arte Kasese” logo, featuring the safari feel of the Kasese region, and set up an Instagram account. The project went viral and the group quickly sold 700 animals!

Over time, it became apparent that Twiga could become a focal point of GlobalRise’s monthly donation program. The concept was expanded to “Twiga & Friends”, featuring other animals – Tembo the elephant, Punda the zebra and Faru the rhinoceros.

While Twiga’s message is broad, each of the animals have supporting messages. Tembo is focused on building great community nutrition. Punda focuses on soil fertility. Faru stresses the importance of good financial planning.

You can see the entire program here: https://www.globalrise.org/projects/kick-stunting-out-of-kasese/

In 2018, the leadership of Kasese Better Living Center called a meeting with over 80 community leaders over two days that included government, pastors and social workers, healthcare leaders and others. GlobalRise was tasked with presentations at the session.

When the meetings were over, the leaders were asked to list the top needs that Kasese Better Living Center could do to help to improve the community. Item number one on the list was nutrition. In fact, the entire community galvanized around a “battle cry” to “Kick Stunting Out of Uganda”.

Blending the animals and this primary message, GlobalRise launched “Twiga’s Crusade to Kick Stunting Out of Kasese!” As you can see, our monthly donor idea was truly co-created with the community of Kasese.

The Kasese Better Living Center is still a work in progress (see photos). GlobalRise was tasked with building the community nutrition program and with their network, the program can be spread throughout the Rwenzori Mountains with over 450 community churches acting as our help centers and mouthpiece to educate the many families here…families and children who are truly forgotten by the world.

When you become a monthly donor, you are confirming what the community feels they need and what we have found, with evidence-based research, that they really do need – improved household nutrition!

Today, the community of Kasese is raising generations of stunted children. Being stunted means short height for age, lifelong inflammation problems, cognitive disabilities and even premature death. Improving life in Kasese starts with removing the conditions that make stunting an everyday part of the people’s lives. This scourge…and abomination…must end. And the good news is that it can with your help!

Check Out Our Other Recent Blogs:

GlobalRise is a 501(c)(3) non-profit public charity and is incorporated in the state of Tennessee, USA.

Please help us to provide good nutrition to children the world has entirely forgotten.